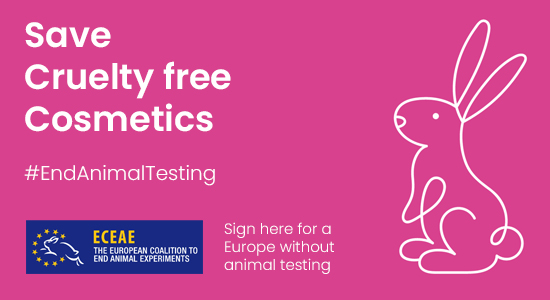 Did you think that animal testing for cosmetics was already banned in the EU? Tests on animals for cosmetic products and their ingredients were banned in Europe in 2009, and a ban on the sale of animal-tested cosmetics has been in place since 2013. We fought hard, with you and Members of the European Parliament, for those bans. However, despite the bans, the European Chemicals Agency is demanding new tests on animals for ingredients – even those used exclusively in cosmetics and ingredients with long-established safe use. Help us protect and strengthen the cosmetics animal testing bans by signing the ECI.

Did you know that the EU’s new Chemicals Strategy for Sustainability could mean millions more tests on animals? The new Chemicals Strategy for Sustainability includes revising European chemicals laws. Its goal is a toxic-free environment. But using animal tests to fill information gaps about chemicals will just lead to even more cruel animal testing and unreliable results that will not benefit human health or our environment. Help us transform European chemicals regulation by signing the ECI.

Are you one of the 72%* of Europeans who agree that Europe needs a concrete plan to bring animal experiments to an end? Thank you! The number of experiments on animals has not changed by much over the past decade, despite incredible advances in science and assurances from Europe’s decision-makers that their goal is to replace animal tests. In all sorts of other important policy areas that citizens care about – climate emissions, for example – the EU has set bold and ambitious targets to drive change. That’s what animals need too. Help us modernise science in the EU to phase out animal experiments by signing the ECI.

We are working together with Eurogroup for Animals, HSI/Europe, Cruelty Free Europe and PETA to end animal testing in the EU. But we need you and all your compassionate friends – a European Citizens’ Initiative (ECI) needs over one million valid signatures to succeed. An ECI shows the European Commission that citizens care and want change – it is a mechanism for people to demand new legislation. Thank you for making your voices – and the voices of animals in laboratories – heard.